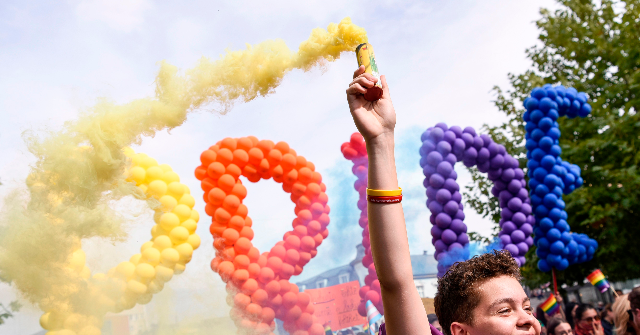 “Slowly but surely, the term ‘sex’ has slowly drifted in meaning and become muddled with gender … that has major consequences for what homosexuality actually is, consequences that are only beginning to be properly understood,” Sullivan wrote November 15, adding:

Transgender advocates argue that men who say they are women really are women, each complete with a “woman’s penis.” They also argue that heterosexual men who refuse to have sex with a man who says he is a woman with a penis are either “bigots” or are mentally ill “transphobes.” Similarly, these activists claim that lesbians are “transphobes” if they refuse to have sex with men who say they are lesbian women.

That’s the price of merging gender with sex. It’s time the rest of us woke up and defended our homosexuality.

This gender-trumps-biological-sex message is being taught to children, Sullivan writes:

In these [pro-transgender school] lesson plans, here’s the definition of homosexuality: “a person’s sexual identity in relation to the gender to which they are attracted.” Homosexuality is thereby redefined as homogenderism. It’s no longer about attraction to the same sex, but to the same gender. I’m no longer homosexual; I’m homogender.

Sullivan’s argument has two levels: He is pushing back against the transgender ideology while also promising to treat individual transgender people “with the respect and dignity they deserve in every context.”

Many conservatives and biology-focused lesbians have noted the growing health dangers and civic costs which are imposed by transgender ideology. For example, the right-of-center Concerned Women for America and the Woman’s Liberation Front are cautiously working together to showcase the danger of allowing men to grab women’s identity. The costs are showing up in sports, civic awards, bathrooms, schools, and other cultural events where women and men have equal, different, and complementary preferences. These two groups agree with each other on the ‘gender identity’ ideology — but sharply differ about abortion and government policy towards marriage, homosexuality, and the different roles played by the two sexes.

But Sullivan is one of the first gay advocates to publicly recognize the transgender ideology’s threat to gays and lesbians.

Aims of the LGB Alliance

1. To advance the interests of lesbians, bisexuals and gay men at a time when they are under threat from concerted attempts to introduce confusion between biological sex and the notion of gender./1 of 4

Lesbians groups say their members increasingly find themselves being pressured to accept sex with self-declared “women” who have male sex organs and who describe themselves as lesbians. Many anecdotes of sexual pressure are provided in a survey report by an U.K.-based lesbian group, Get The L Out:

[Lesbian] women who were in groups that were not “women-only” reported “feeling silenced”, “intimidated”, “unable to speak freely”, “uncomfortable” with the group policy and wishing the group was for women only but “dare not say it”. Several reported how “transwomen derail” and monopolise the discussion to be solely about their issues while shutting down discussion about women’s or lesbians’ issues by calling it “transphobic”. Group dynamics are described as “toxic”. Several women explain how “transwomen are behaving just like men”. Lesbians constantly report being told their sexuality is “wrong” if they openly state they are solely attracted to women. Women reported “threats”, “intimidations” and “abuse”, by “transwomen” and allies.

50 percent of the respondents reported being pressured or coerced to accept a transwoman as a sexual partner. Much of this pressure happens online. Lesbians are routinely harassed for stating that their sexuality excludes males regardless of their “gender identity”. Most respondents reported being subjected to such rhetoric directly or indirectly, and have experienced it as a form of “psychological coercion” with the general feeling that it is “online everywhere” and “relentless”.

Many lesbians reveal leading a double life where their lesbianism is toned down. Many have no social life or meet underground and explain how difficult and dangerous it has become to meet other lesbians. Lesbian dating sites are infiltrated by men who pose as lesbians (whether they identify as transwoman or not and whether they “pass” as women or not), leading many lesbians to feel unsafe at the thought of unknowingly going on a date with a man. Both in groups and dating sites, the presence of men who identify as transwomen acts as a threat, leading to self-policing and silencing.

Time Mag. endorses transgender activist who claimed that ‘women’ can have male sexual organs. Hmm. Does that mean progressives get to label lesbians as ‘bigots’ if they won’t date biological men who claim they are living as women? https://t.co/BfuvY5w1xP

Feminists are using Twitter and YouTube to spotlight the aggressive demand by transgender women that women must agree that the men have become women.

The lesbian scene is colonised by them now. We cannot escape them. They disrespect our boundaries and threaten us if we don’t have sex with them #cottonceiling. https://t.co/qPBHpaGkOm

There’s also this lesbian sing-along. Videos (for both songs) by @Peachyoghurt_YT! https://t.co/68uUkiWtPH

Option B: The concept of “bigotry” creeps so far from the traditional definition that it becomes utterly meaningless and loses all power, which will be very convenient for actual bigots. https://t.co/lP3BGMrGUT

I support @AllianceLGB because they have the courage to call out pseudo-scientific nonsense.

There are two *sexes* (M&F), and ~7 billion different personalities. Teaching kids they have to identify into one of “over 100” gender identities is harmful, restrictive & regressive. https://t.co/0OVeXxJIaJ

Interview with the German child and adolescent psychiatrist Alexander Korte on gender and ROGD: “Treatment with puberty blockers, to put it bluntly, is a project to avert homosexuality.” https://t.co/aYeXlucp1V

This is a viciously toxic form of men’s sexual rights activism that has managed to rebrand and reframe its… https://t.co/4CrYmon8Np via @po_st

Feminist speaker stares down jeering swarm of pro-transgender progressives: “On what basis do women’s rights exist, if the word ‘woman’ is meaningless?” https://t.co/053YOQNd0j

WATCH: Patricia Arquette At The Emmys: ‘Trans People Are Still Being Persecuted’

Were the Vikings smoking pot while exploring Newfoundland?