Perhaps it’s only appropriate that they’re rolling out another “Matrix” movie.

There’s a famous scene in the original “Matrix” where Keanu Reeves’ character, Neo, spots a black cat padding along a hallway. Seconds later, Neo sees the same black cat. Déjà vu is a bad thing in the Matrix – to say nothing of the superstition of spotting a black cat in your path.

The shootings in El Paso, Texas, and Dayton, Ohio, were weeks ago. We’ve again arrived at a point of déjà vu. It’s even déjà vu compounded on top of déjà vu, whether it be Columbine or Virginia Tech or Sandy Hook or Parkland.

President Trump expressed strong support for bolstered background checks a few weeks ago. Then, not so much. Now, maybe they’re back on the table. No one really knows, because, well, we’ll be off to the races on something else soon enough.

People spoke of the dual shootings in Texas and Ohio being the one, or the two, to change things. But now, we’re immersed in a diplomatic row with the prime minister of Denmark.

With all of the waffling this week, maybe the president will have a change of heart on gun control after all. If that’s the case, Trump’s disposition will be similar to the response John Lennon gave when The Beatles came to the United States. When asked by a reporter how he “found America,” Lennon quipped, “Turn left at Greenland.”

But, it’s unlikely. A mass shooting. The tears. The anguish. The proclamations and calls to actions. And then…

The black cat walked through the hallway, again. And like “The Matrix,” the story repeats itself, revolution after revolution.

Not a lot happens.

Presumably, Pelosi and House Judiciary Committee Chairman Jerry Nadler, D-N.Y., wouldn’t go to work on that legislation if they didn’t have the votes to pass them on the House floor next month. What’s absent from Pelosi’s agenda is a bill to ban “assault weapons.” Lots of Democrats have talked about barring such arms. But, there’s a reason such a bill isn’t on the House docket: it wouldn’t pass the House.

So, to be fair, things would be a little different after El Paso and Dayton if the House, now under the Democrats’ control, intended to advance legislation as a response to those mass shootings. But, the chances of anything becoming law has remained a stretch. There’s the Senate, with its 60-vote threshold to overcome a filibuster on legislation, as well as an apparent lack of support from President Trump. The Republican-controlled Senate likely would jump-to if the president delivered a full-throated endorsement.

McConnell was clear earlier this month when he said he’d be willing to look at something that could pass the House and Senate — and earn the president’s signature. McConnell likely will take a dim view of anything that comes up short of running the table.

“We’re where we’ve always been,” one knowledgeable Republican source told Fox News this week about guns. “There’s a shooting. Then, there’s talk, but there’s no real legislative push. There isn’t enough of a push to make a difference.”

The source is right.

Yes, the phones on Capitol Hill light up. There are declarations by lawmakers. Marches. Interviews with shooting survivors. But, “changing things” hinges on the “constants” in the equation on Capitol Hill. The noise after each mass shooting still doesn’t alter the parliamentary calculus.

Pelosi apparently has intended to move firearms legislation in the House in September because she can. That part of the equation would work in the favor of Democrats pushing for stiffer gun regulations. Such a scenario would allow Democrats to pressure McConnell and the Senate to react. Enough pressure and the Senate could act – or the issue could resonate at the ballot box in 2020. But, with few exceptions, Democrats haven’t persuaded voters to pull the electoral levers for them when it comes to guns in the era of mass shootings.

Consider the circumstances going into the 2018 midterms after the Parkland massacre that February. Conservative Democrats were struggling to hold Senate seats in states where gun restrictions were unpopular: West Virginia, North Dakota and Indiana. Only Sen. Joe Manchin, D-W.Va., emerged victorious in that crowd. A state Democrats thought they had an outside chance to flip? Texas. Former Rep. Beto O’Rourke, the Democrat, lost to Republican Sen. Ted Cruz.

So, you see the problem in the Senate.

Very little has changed. The math has been the constant – even in the postscript of El Paso and Dayton.

Can Democrats flip Texas after El Paso? Republican Sen. John Cornyn is on the ballot. Democrats have a shot at winning a few suburban congressional House seats. But, when it comes to guns, it is still Texas.

Arizona? Maybe. Former astronaut Mark Kelly, the husband of former Rep. Gabrielle Giffords, a Democrat, is running against Republican Sen. Martha McSally. Arizona has been an emerging state for Democrats.

Still, Democrats have to win control of the Senate. On a very good Election Night night for the party, Sen. Doug Jones of Alabama would hold his seat and a Democrat would defeat GOP Sen. Steve Daines in Montana. But Alabama and Montana offer versions of the “Texas problem” for Democrats. Any Democrat who wins in those states likely won’t align with the party orthodoxy on firearms. 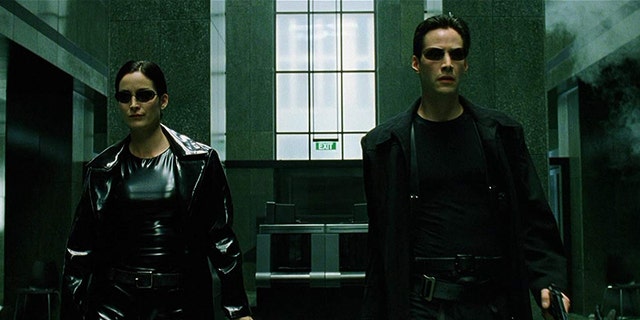 Congress’ battles over gun legislation have similarities to “The Matrix.” (Warner Bros.)

So, those pushing for enhanced restrictions on firearms remain trapped in “The Matrix.” They keep seeing the black cat and experiencing déjà vu. It’s doubtful anything moves now. Things would be just as unlikely even if Democrats pick up Senate seats, let alone seize control of the Senate next year.

Inslee Drops Out Of Presidential Race