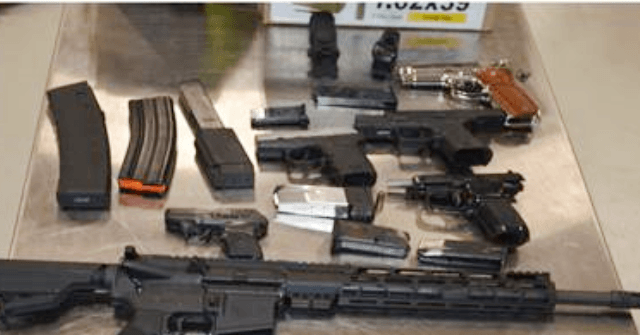 Laredo Sector Customs and Border Protection officers seized a load of firearms and ammunition allegedly being smuggled into Mexico through a port of entry. The officers seized a total of seven firearms, eight magazines, and more than 10,000 rounds of ammunition.

Officers assigned to the Gateway to the Americas International Bridge observed a 2007 Chevrolet Impala approaching for a departure inspection. The officers referred the driver to a secondary station, according to Laredo Sector officials.

The officers conducted a K-9 search of the vehicle, followed by an intrusive physical search which revealed the cache of weapons and ammunition, CBP officials reported.

“This type of incident highlights the dangers our CBP officers could face on any given day,” said Port Director Albert Flores, Laredo Port of Entry. “This firearms and ammunition seizure is a direct reflection of our continuing commitment in keeping our community safe.”

During the physical search, CBP officers discovered one Hi-Point .45 Caliber, one Diamondback 15 multi-caliber, one SCCY 9mm, one Smith and Wesson 39, one SHE 89 Caliber, one Springfield 45 ACP Compact, one Ruger .380 Auto, eight assorted firearm magazines, and 10,000 7.62x39mm rounds of ammunition and one .40 caliber bullet, the release stated.

The officers seized the firearms and associated gear with the vehicle. Officers also detained the suspect. The report provides no information about the identity, nationality, or immigration status of the driver.

It is likely the weapons and ammunition were being smuggled to cartel members on the Mexican side of the border. However, officials did not disclose the motivation for the failed smuggling attempt. Possession of firearms or even a single round of ammunition is a serious offense in Mexico.

Mosquitoes are the worst in these cities, pest control company Orkin says