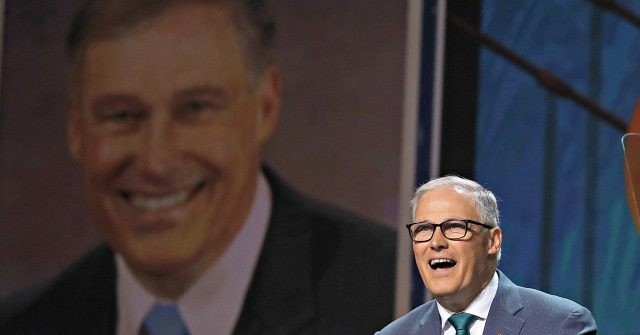 Gov. Jay Inslee (D-WA) accused the Democratic National Committee (DNC) Wednesday of threatening to exclude him and other 2020 presidential candidates from “future debates” if they took part in ones organized by outside groups on the topic of climate change.

Inslee, who has centered his long shot bid for the Democratic presidenital nomination on environmental issues, had been pushing the DNC for months to host a debate exclusively on climate change. The idea picked up steam in recent weeks. even garnering the endorsement of high profile liberal groups and at least five other presidential candidates, including Bernie Sanders. Despite the support, the DNC ultimately decided it would not host a single issue debate on the topic.

Inslee’s campaign received the news via call Wednesday, according to a statement shared on social media. The governor said that instead of encouraging candidates to pursue an outside forum to discuss the issue, the DNC explicitly threatened to exclude him from future debates if he followed that route.

“Further, [the DNC] explained that if we participated in anyone else’s climate debate, we will not be invited to future debates,” Inslee said. “This is deeply disappointing,”

The governor also accused the DNC of “silencing the voices” through intimidation.

“The DNC is silencing the voices of Democratic activists, many of our progressive partner organizations, and nearly half of the Democratic presidential field, who want to debate the existential crisis of our time,” Inslee said. “Democratic voters say that climate change is their top issue; the Democratic National Committee must listen to the grassroots of the party.”

In a statement released responding to Inslee’s accusations, the DNC said it took the issue of climate change seriously, but did not feel a single issue debate was appropriate.

Our goal is to provide a platform for candidates to have a vigorous discussion on ideas and solutions on the many issues that voters care about, including the economy, climate change, and health care. While climate change is at the top of our list, the DNC will not be holding entire debates on a single issue area because we want to make sure voters have the ability to hear from candidates on dozens of issues of importance to American voters.

The DNC did not, however, deny it threatened to ban candidates from future debates if they take part in ones organized by outside groups.
The moves comes only a week after the DNC tightened its eligibility requirements for the third and fourth presidential debates scheduled later this fall—a decision many believe only benefits early frontrunners like former Vice President Joe Biden.