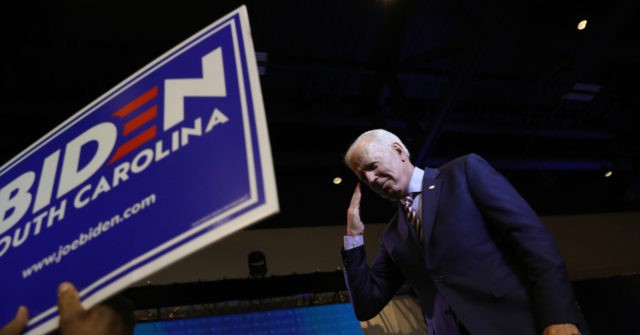 The former vice president made the comments at Rep. Jim Clyburn’s (D-SC) annual fish fry while touting the need for all the Democrat candidates to unite and focus on defeating President Donald Trump.

“Whomever the Democratic nominee is,” Biden said, “we have to stay together and elect a Democratic president of the United States of America.”

“I tell you, I do miss Fritz being here,” he added after finishing his remarks, according to Vice News.

Hollings, who passed away earlier this year, served in the U.S. Senate from 1966 to 2006. Prior to joining Congress, he was governor of South Carolina from 1959 to 1963, an office he originally sought on the basis of his opposition to the Brown v. Board of Education decision, which struck down segregation in public schools. Hollings kept that stance for the early portion of his term, but eventually changed course and supported integration. It has been noted, though, that full desegregation of South Carolina’s public schools did not occur until after he left the governorship.

In the Senate, Hollings cut a moderate to liberal profile by championing a national hunger policy and working to reign in the deficit. During his tenure, Hollings’ views on race appeared to grow and develop ,as exhibited by his endorsement of Jesse Jackson in the 1988 presidential race.

The issue, however, was still complicated at the time. In 1993, Hollings stirred controversy by saying African diplomats only attended international conferences to “get a good square meal” rather than “eating each other.”

When eulogizing Hollings in April, Biden noted his life and views were heavily influenced by the times.

The fish fry was Biden’s first major public appearance since invoking the late-Sens. James Eastland (D-MS) and Herman Talmdage (D-GA) at a fundraiser on Tuesday.

“I was in a caucus with James O. Eastland,” Biden told donors with a mocked Southern drawl. “He never called me boy, he always called me son.”

The remarks quickly sparked controversy since both men were avowed segregationists who dedicated their careers to stopping the advancement of civil rights. Eastland, in particular, as the long-serving chairman of the Senate Judiciary Committee, attempted to derail the 1964 Civil Rights Act and Thurgood Marshall’s nomination to the Supreme Court.

When asked about the controversy and the defiant stand he took when urged to apologize by fellow presidential candidate Sen. Cory Booker (D-NJ), Biden said it was not necessary for anyone to apologize.

Bolton Tells Iran: Do Not Mistake U.S. ‘Prudence&#039; for Weakness

Venezuela’s war on children at a &#039;breaking point&#039; over lack of medical care

Warren: I Would Close Gitmo

Exclusive — U.S. Virgin Islands Senator on Epstein: ‘Widespread Corruption’ in Territory, ‘He Has People on His Payroll’

After Trump’s spiritual adviser calls for ‘all satanic pregnancies to miscarry,’ she says it was metaphor…

Locust swarms in Africa are worst in decades…

Cardinal at center of 2 Popes storm doubles down on celibacy…