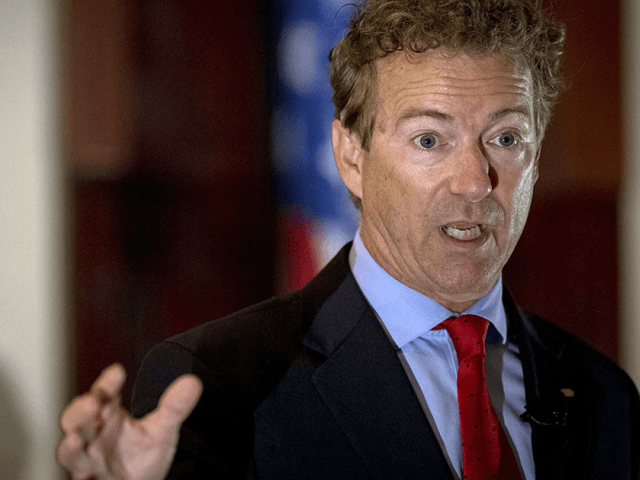 “I can’t vote to give the president the power to spend money that hasn’t been appropriated by Congress,” Paul told a home-state audience at Western Kentucky University’s Augenstein Alumni Center on May 2. “We may want more money for border security, but Congress didn’t authorize it. If we take away those checks and balances, it’s a dangerous thing,” he said, according to the Bowling Green Daily News.

Paul is the fifth GOP Senator who says he will oppose Trump’s emergency declaration. His vote will allow Democrats to get a resolution against emergency spending through the Senate with a vote or two to spare.

But Trump’s emergency declaration is expected to survive because Trump can veto the Democrats’ resolution against the emergency.

Trump is using the emergency declaration to redirect several billion dollars of appropriated funds to help build additional miles of border wall. The declaration comes after the D.C. establishment largely blocked Trump’s 2016 mandate for immigration reform. The GOP and Democratic establishments have done little to reverse the rising death toll from smuggled drugs, little to stop the rising inflow of low-wage economic migrants, and little to reverse the chaotic diversity in blue-collar neighborhoods which is being caused by the establishment’s cheap-labor immigration policy.

Democrats need support from 20 GOP Senators to get the 67 votes needed to override Trump’s veto.

McConnell agreed to support the border emergency and the associated funding for the border-wall, in exchange for Trump’s support of GOP’s botched 2019 budget agreement with the Democrats. The deal provided Trump with money for just 55 miles of wall, and conditions that allow Democrats to block construction until October.

GOP estb. pols don’t like Trump’s national emergency. But they squirm and dodge b/c Sen. McConnell promised to back Trump’s emergency after his deputies botched border talks with Democrats. Maybe they should have fought for their voters’ wall in 2017-8? https://t.co/xVBHeAKkaL

Trump, however, is pushing hard against Senators who have helped block his wall since early 2017. “It is a very dangerous thing for people to be voting against border security for anybody, including Republicans,” Trump said in a February 28 interview on Fox News. “I really think that Republicans that vote against border security and the wall … I think they put themselves at great jeopardy.”

President Trump used his authority under the law to declare a national emergency on our southern border, but now Democrats are trying to stop the president from exercising the authority that the Congress gave him to address this real crisis. So today, we call on every member of Congress. Stand up for border security. Stop playing politics with the security of the American people, and stand with President Trump for a stronger and safer America.

Trump “has got sufficient funding without a national emergency,” Sen. Lamar Alexander said after a February 28 speech on the Senate floor. “He can build a wall and avoid a dangerous precedent,” said Alexander, who has been a member of the GOP’s cheap-labor caucus since at least 2013, when he backed the “Gang of Eight” amnesty.” Trump’s emergency is “unnecessary, unwise and inconsistent with the Constitution,” said Alexander, who is not running for election in 2020.

Several GOP Senators have explained why they will not support the President’s border defense plan. According to Politico:

Alexander is just one of about 10 senators who are committed to blocking the president’s move or are considering doing so, suggesting the White House has a ways to go to avoid a public split in the party and a Trump veto.

“The president can get way more money than he’s even asking for without setting the Constitution on its head,” said this undecided senator, who requested anonymity to speak frankly. “I am very, very skeptical about the precedent this makes.”

If Trump doesn’t back down, there is still deep reluctance in the GOP to becoming the 51st vote for the disapproval resolution that the Senate is expected to vote on in March. So far, Sens. Thom Tillis of North Carolina, Lisa Murkowski of Alaska and Susan Collins of Maine are the only Republicans who have said they would support blocking Trump on his plans to seize billions from military projects.

Other Senators are dodging the issue. According to the Hill:

“I think it’s clear that people want to see the final documentation and they want to know the specific statutory basis,” said Sen. John Kennedy (R-La.), who is expected to back Trump.  Asked how they would vote on the resolution of disapproval, both Sens. Ron Johnson (R-Wis.) and James Lankford (R-Okla.) demurred, noting that they hadn’t yet seen a detailed list indicating from where the White House plans to divert funds.

Texas Sen. Ted Cruz is also hinting at opposition.  “I have long believed and advocated that every president, Republican and Democrat, should act consistent with the Constitution and federal law, and I’m assessing those legal authorities right now,” he said.

Is America Too Crowded?

DANGER: Banks Handing Out Beefed-Up Credit Lines No One Asked For…